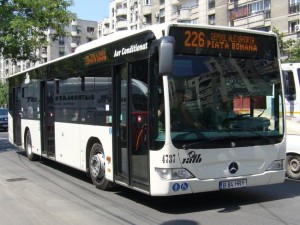 Surface transport in Bucharest is run by Regia Autonomă de Transport Bucureşti (RATB) and consists of an extensive network of buses, trolleybuses, trams and light rail (called metrou uşor which translates as light metro, but it is, in fact, a light rail system). The RATB network is one of the most dense in Europe, and the fourth largest on the continent, carrying about 1.7 million passengers daily on 121 bus lines, 30 tram lines, 3 light rail lines and 20 trolleybus lines. At times, however, it does suffer from severe crowding.

The Bucharest Metro (Metroul Bucureşti in Romanian) is an underground urban railway network that serves the capital of Romania, Bucharest. The network is run by Metrorex. It is one of the most accessed systems of the Bucharest public transport network with an average ridership of 800,000 passengers per day.[3] In total, the network is 67 km long and has 49 stations. 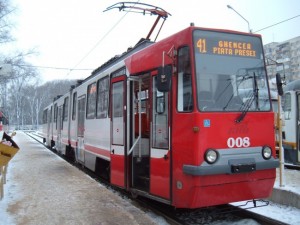 The two systems operate separately and have separate payment systems. However the price for a trip in those systems is very close: 2.6 RON (two trips) in the case of surface and 3.0 RON (two trips) in the case of underground transport. You can also buy subscriptions valid for one day, which costs 5,5 RON for subway and 8 RON for RATB (it is called MULTIPLU Card). For subway, the access cards can be bought from each station. RATB has sale points nearly every station – but not all.
If you want to stay more in Bucharest, there is an access card that works on both systems, Active card, is called and the price is 77 RON a month. 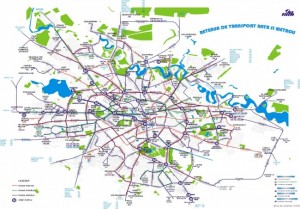 The two lines crossing the areas where our apartments are located are: 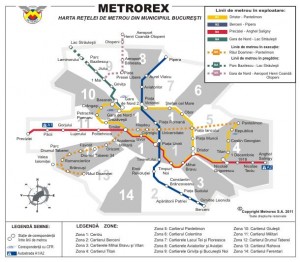 The apartments we offer are located only in central area of Bucharest – so you have close access to subway and surface transportation.
For more details visit www.ratb.ro and www.metrorex.ro