CISMIGIU GARDENS are a public park near the center of Bucharest, Romania, spanning areas on all sides of an artificial lake. The gardens’ creation was an important moment in the history of Bucharest. They form the oldest and, at 16 hectares, the largest park in city’s central area. The main entrance is from Regina Elisabeta Boulevard, in front of the City Hall; there is another major entrance at the Ştirbei Vodă Street, near the Creţulescu Palace. The southwestern corner of the park is adjacent to the Gheorghe Lazăr High School.
Address: Elizabeth Queen

HERASTRAU PARK is a large park on the northern side of Bucharest, Romania, around Lake Herăstrău. The park has an area of about 1.1 km², of which 0.7 km² is the lake. Initially, the area was full of marshes, but these were drained between 1930 and 1935, and the park was opened in 1936. The park is divided into two zones: a rustic or natural zone (the Village Museum), which is left more or less undisturbed, and a public/’active’ domain with open areas for recreation activities. Small boats are allowed on the lake. At various points in its history it has been called Parcul Naţional, Parcul Carol II, and Parcul I. V. Stalin. The park once featured a statue of Stalin, which was torn down in 1956.
Address: Aviatorilor Avenue 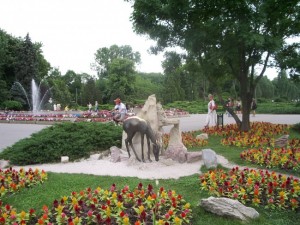 KISELEFF PARK is a park in Bucharest, located by both sides of Kiseleff Street, in the triangle between Ion Mihalache Avenue, Aviatorilor Avenue and Ion Mincu Street. The park was arranged after 1832, year in which was built Kiseleff Avenue, from the forest located in this part of the city. The landscape architect was Wilhelm Mayer. Currently the park has an area of 31,690 hectares.
Since April 27, 2000 the park was graced with a new monument, Romanian Infantry Monument.
Address: Kiseleff Avenue 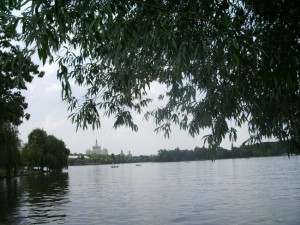 TINERETULUI PARK The park, which was created in 1965 and planned by the architect Valentin Donose, was designed as the main recreational space for southern Bucharest, an area which was heavily developed during the 1960s and 1970s. Aside from green areas, the park contains a number of playgrounds as well as a navigable lake, utilised by leisure boats in summer. Tineretului Park contains the Sala Polivalentă, one of Bucharest’s largest multi-purpose halls, used for concerts and indoor sporting events.
The south-east corner of the park is a children’s area called “Orăşelul Copiilor” (“Kids’ Mini-town”).
Address: Tineretului Avenue

PARK CAROL I is a public park in Bucharest, Romania, named after King Carol I of Romania. For the duration of the communist regime, it was called Liberty Park (Parcul Libertăţii). The park was designed by French landscape artist Édouard Redont in 1900 on Filaret Hill and inaugurated in 1906. The park had an initial surface area of 360,000m², with a 20,000m² lake in the middle. It is officially recognized as a historical monument and is therefore protected by law. Administration of the park is undertaken mostly by the Bucharest City Hall, whereas monuments are in the care of the Ministry of Culture and Religious Affairs.
Address: Serban Voda Street

BUCHAREST BOTANICAL GARDEN now named after its founder, Dimitrie Brândză, is located in the Cotroceni neighbourhood of Bucharest, Romania. It has a surface of 17.5 hectares (including 4,000 m² of greenhouses), and has more than 10,000 species of plants.
The first botanical garden in Bucharest was founded in 1860 near the Medicine Faculty by Carol Davila. Its first director was the botanist Ulrich Hoffmann, followed six years later by Dimitrie Grecescu. The garden was eventually moved to its current location in 1884 by Dimitrie Brândză, a Romanian botanist, and Fuchs, a Belgian landscape architect. The gardens were opened in 1891, when the building of the greenhouses finished. The garden was damaged during World War I, when it was used by the German occupation troops, and during World War II when it was hit by Anglo-American bombardments.
In the Garden there is a Botanical Museum in a building of the Brâncovenesc style, located near the entrance gate, where more than 5,000 plant species are displayed, including 1,000 exotic plants.
Address: Cotroceni Street no: 32